For the past 21 years, my heart has become heavy with dread every time I have to have my photo taken.  I hate Skype, because there’s nothing else for people to do but look at my FACE!  At my wedding it was nerve-wracking and terrible (while simultaneously joyous, of course) to walk down the aisle between clusters of friends and family with their beaming faces and happy eyes. Everyone was smiling, and I should have been too.

Much of the time, I can’t smile very well, and that has been by far the most challenging manifestation of my autoimmune disease, Myasthenia Gravis. The disease causes weakness, mostly in voluntary muscles. My face is affected; in addition to my weak smile, sometimes I have droopy eyes or double vision, and often I have a hard time speaking for long periods.

I gravitate toward sardonic, humorous, somewhat deadpan friends, both because I share their humor and because they don’t demand as much smiling from me (except when I laugh at their jokes, which I will often do behind the shield of my hand like a giggling Japanese girl). 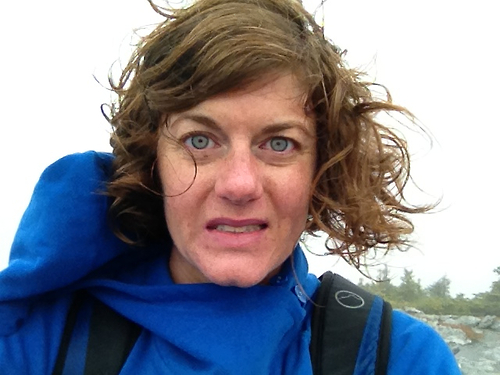 One time, we were taking a family photo and my step-grandpa was behind the camera. He kept asking me to smile harder – bigger! You can do better than that! Just try! And of course I ran to my room crying. I was probably 20 at the time. It’s been a longstanding emotional issue that I’ve never really addressed fully over my years with this disease; something on which I have tried not to dwell, but something that constantly plagues me.

A year ago, I attended the Healthcare Experience Design conference in Boston. I saw the artist Regina Holliday speak about her husband’s cancer, terrible care experience, and subsequent death. She showed an image of her redesign of the ‘pain scale’ – which used representations of the patient’s face depicting a spectrum of emotions to show how they were feeling. Her slide brought to the surface an idea that had been bouncing around in my mind for awhile: what if I took photographs of my face and smile at varying levels of severity and used it to show my doctors the full spectrum of my symptoms?

I walked up to Regina after her talk, where she was painting on an easel in the corner of the conference venue, and told her I was very inspired by her art+advocacy work. I ended up telling her a little bit about my story, and as I talked about my smile, the tears started to fall. This powerful woman took my hands and looked into my eyes and I can’t even remember what she was saying but it was something to the effect of, ‘you can’t let it silence you, you need to speak up and help people’ (or at least that’s what I took out of it.)

That summer, I decided to go ahead with my idea – to take a photo of my smile every day, no matter what. It was scary, because I didn’t want to see how bad my smile looked.  I used a private tumblr blog and iOS app to take the photos, and I made notes about what the day was like, what the weather was like, whether I was tired, etc. I did this for about a month and a half, and the results floored me.

For the most part, my smile did not look as bad as it felt. When I felt like a grimacing dog, I looked like a mildly pleasant – if slightly standoffish – young lady. Sometimes I really did look terrible, but not as often as I thought. I started smiling when I was alone, on my walks and runs in the woods, in an attempt to strengthen my face muscles.

Last fall, I put all the smile photos into an album on my iPad and organized them on a spectrum – from weakest smile to strongest smile. I brought them to my first visit with a new doctor here in Burlington – a young, fit, superman-resembling neurologist. They were really helpful during the visit, as I was actually feeling very strong that day, so I was ableto show him what I looked like when I was NOT strong. He appreciated it, and he could better understand the breadth and occasional severity of my symptoms.

So now the Healthcare Experience Design conference is rolling around again. I am presenting a patient panel next Monday that will highlight ‘Patient Innovators.’  For the occasion, I sent Regina Holliday a suit jacket so that I could become a part of her Walking Gallery – a series of jackets on which she has painted the health ‘story’ of the wearer-  to be worn at healthcare events and conferences as a means of raising awareness. I didn’t tell her what to paint, but I shared my story with her and sent some photos.

She created the most magnificent painting I could imagine: a jacket named ‘Quantified Smile‘ that depicts my face in different states of smile-strength, along with a representation of the health history timeline I had put together in an effort to better communicate about my health story. All of it is in the context of a google search. I’d say my smile is my kryptonite, or maybe it’s my achilles heel, but I’m so proud to wear this jacket on my back and I will be happy to explain its meaning to the people I meet. This jacket is a way to confront my smile head-on, instead of making deadpan jokes or hiding behind my hand.

Mostly, I feel proud to return to the conference this year as an active participant, as a UX designer who is now completely focused on improving healthcare, and of course as a member of the Walking Gallery. And I know that even if my smile isn’t the best, I’ve learned that it’s not usually as bad as I think, and I hope that I project my inner smile through my voice and eyes – as an amazingly smart person told me last year, “I find you very adept at expressing joy.”

3 thoughts on “Smiling on the inside”

Hi, I'm a User Experience Designer and long-time Myasthenia Gravis patient. I use design, empathy and love to empower patients and improve healthcare. Find more about my professional self at katiemccurdy.com.